For whatever reason, whenever we disable one of our cars for a bit more than routine maintenance, we normally get a call asking if it's available (you know – it’s a bit like every time you sit down to eat the phone rings)! On this occasion we were in the process of changing the 13 sq metres of carpet in the Triumph Roadster (yes 13 sq metres of carpet!).

The car was up on stands, the wheels were off, the interior was stripped out and the old carpets were busily providing patterns for the new ones – we had plenty of time complete before the car's next engagement at Woburn Abbey – then the email came from Norway:
“We are a TV station in Norway (TV2) and we are making a 3rd series of a popular TV show called Golden Years. We would like to use your Triumph Roadster on the set of Midsomer Murders to interview John Nettles who currently plays DCI – Tom Barnaby and who played the part of Sergeant Bergerac in the Jersey based detective series ... as his daily transport in Bergerac was a Triumph Roadster could your car be at Gerrards Cross next Tuesday...”

Given that the Triumph Roadster was the every day transport of Sergeant Bergerac we could not miss this opportunity, so the carpet installation program was bought forward, to be completed in just 4 days! Despite the sewing machine having an incredible appetite for needles and Sue having to hand sew the wheel arch covers (4 hours of sewing on each one) the carpets were completed in time and now look better than ever (ready for the summer weddings). It was a beautiful sunny day so with the top down I set off for Gerrards Cross with my daughter (our keen photographer that took all the photos for this blog post) and a colleague from the Triumph Roadster Club to meet the man that has done much to make the Triumph Roadster marque famous.

At the end of the interview, I had a surprise chance to act along side John Nettles as a ‘link’ between the various celebrities being interviewed by TV2, Norway – I only had one line to say but it was still a lot of fun. Having the actor that actually played Bergarac sit in our Triumph Roadster was also a wonderful privilege! 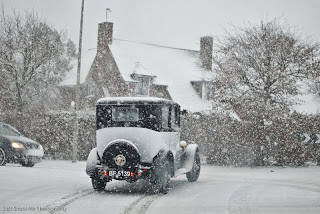