We operate our vintage car all year round, as it remains busy in the winter as well as the summer it helps us to keep our prices the most competitive in the area. The Citroen has been out on 2 weddings in January and one in February so far this year.

We have managed to beat 2 x wedding-car 'in-house' records this year; with the coldest wedding (minus 2 deg) in January and the snowiest in February. The car is equipped with a very good heater (not a 1927 fitment) which allows us to operate the car in such conditions.

Andre Citroen, the inventor and designer of the Citroen 'mark' produced many derivetives of the early Citroen, these included ......... Enclosed saloon cars, Open top tourers, Taxi’s, Lorries, Vans and even cars that ran on railway lines, however, one of my favourite early Citroen derivative is the Citroen 'Half-Track' !

Now there is no doubt that we could do with one of these fine vehicles on our fleet given the current cold spell, however, as they are even rarer than our car there is practically no chance of acquiring one (and it may not snow for another 5 years anyway).

The wedding last Saturday 7th Feb 2009 between Kim and Gavin was carefully planned given the weather conditions, we drove the route early morning and again shortly before the actual journey.

We checked the access in to the brides road, wedding venue and Reception - We made contingency plans which included (as a last resort if the snow was to worsen) a 4-wheel-drive vehicle on stand-by 'just in case' we needed it to get the bride there on time.

I am pleased to announce that our Vintage car performed perfectly given the conditions and those little wheels sunk in to the snow and gripped far better than the larger wheels of modern cars where they compact the snow which prevents traction !

No such problems with the Vintage !

We got through un-aided and did not have to resort to a contingency plan, though we did use our shovel once to rescue another ‘modern’ car stuck in the snow during the day.

The sun is out but the snow remained

All wedding pictures courtesey of www.just-shoot-me.co.uk 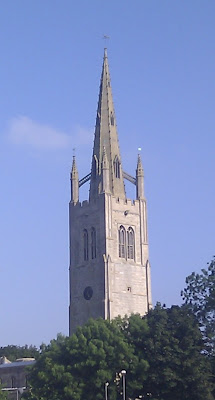 Wedding-Car.co.uk day out to Saint James the Great Church in Hanslope